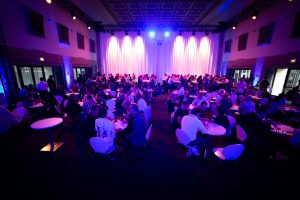 More than 500 visitors, 400 one-to-one meetings, 30 presentations and an after-show party with a surprise – in its fourth year the ECD on 3rd May surpassed even the highest expectations. “You can say without doubt that this was the most successful ECD so far,” said Tradebyte CEO Matthias Schulte. But what was the decisive factor in the renewed success?
In the morning, Matthias Schulte took up these thoughts in front of the 500 participants in his speech in the Wappenhalle. He stated different reasons which might be responsible and drew the conclusion: “The real reason for the success of the ECD is you, our guests.” He emphasised this point with the slogan of the day, which will be the slogan of the ECD from now on: “Platform business is a people business.” The platform economy and business models for the marketplace business were again the central topics of the event. But there was more, an idea which Schulte expressed in his speech in the evening: “All of us here are founders and we’re at the centre of the digital transformation. Let’s be brave, show that we’re pioneers and take the step into the digital future.”

Another future topic was identified in the programme of the ECD. In her keynote speech “GenZ as the indicators of future markets and future commerce”, Melanie Mohr, CEO of the YEAY video shopping app, took the astounded audience into the consumer world of generation Z. Video shopping of microbrands, crypto currencies and blockchain –insights into the requirements of the youngest group of buyers was tremendous. The format of a visionary keynote speech will definitely remain a part of the ECD programme.

The unique event format and programme offered all market players – including top dogs such as Zalando, Otto, Digitech Galaxus and real.de – the opportunity to exchange views and drive their ideas forward together. “It’s all about the network and expertise with the background of utilising turnover potential in e-commerce,” explains Matthias Schulte. “Tradebyte is simply the enabler, the platform. The DNA of the ECD is made up of the conversations, the dialogues, directly from decision-maker to decision-maker in relaxed surroundings.”

Again, the event was sold out weeks before it took place. The Meeting Lounge, the heart of the ECD, was frequented more than ever and many an intensive discussion was held on the lawn behind the Wappenhalle in the early summer weather. Speakers and panel experts gave the audience an insight into their business models in the Session SLOT, Best Practice SLOT and in the Channel SLOT. Manufacturers, retailers, consultants and service providers revealed their experiences in a relaxed atmosphere and took the opportunity to show their cards. There was also the new format of the Deep Dive SLOT in which Tradebyte experts provided insights into processes and innovations all around the Tradebyte software in small, interactive groups.

The motto this year was again “Play Digital” and was an excellent supplement to the “People Business” idea expressed by Matthias Schulte. Remaining playful, thinking creatively, being quick and brave – you could really feel the optimistic mood of the day. Feinkost Käfer made sure the catering was fantastic during the entire day. Shortly after dinner there was another small surprise: After an amazing light show, the curtain in the Wappenhalle opened, the Meeting Lounge disappeared and turned into a veritable club. It didn’t take DJ Markus Winter long to get the ECD guests up on the dance floor. The eventful and impressive conference day turned into an exuberant party which went on until the early hours of the morning.

Experience the ECD 2018 in action here: Watch the video. 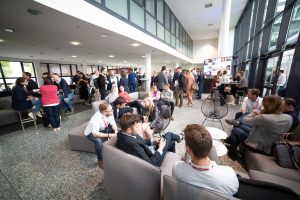 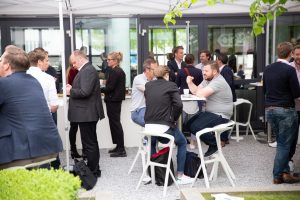